View source
watch 01:36
We're Getting Mutants in the MCU - The Loop
Do you like this video?
Play Sound

The song is about a relationship that's always a bit off. Both people tried to go out with others and forget one another, but are still thinking about each other. Taylor mentioned that, unlike previous albums where the other person is always wrong, she admits to wrongdoings herself. It's about a romantic relationship Taylor had; it's rumoured to be about Harry Styles because of the song title and the necklace they wore during their relationship appearing in the music video.[1] Taylor seems to confirm this in a Rolling Stone interview that they could've called it "I'm Not Even Sorry".

The music video was released on February 9, 2015. It features actor Dominic Sherwood. It was filmed in Los Angeles in Summer 2014.

Storyline
The music video doesn't have a clear storyline. It features shots of Taylor and her lover in the car, in the bed room, on the beach and in the woods. It ends with Taylor sitting alone in the woods, when a car arrives and her lover steps out. 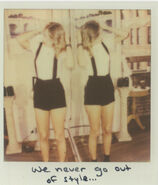 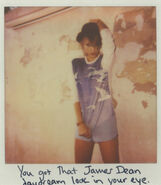 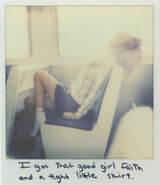