Out of the Woods

Out of the Woods

Out of the Woods is the fourth track and sixth single of Taylor's fifth album 1989. It was released on October 14, 2014.

“This song is about the fragility and kind of breakable nature of some relationships. This was a relationship where I was kind of living day-to-day wondering where it was going, if it was going anywhere, if it was going to end the next day. It was a relationship where you kind of never feel like you’re standing on solid ground. And that kind of a feeling brings on excitement, but also extreme anxiety, and kind of a frantic feeling of wondering — endless questions. And this song sounds exactly like that frantic feeling of anxiety and questioning, but it stresses that even if a relationship is breakable and fragile and full of anxiety, it doesn’t mean that it isn’t worthwhile, exciting, beautiful, and all the things that we look for.”

- Taylor about Out of the Woods[1]

To Rolling Stone , Taylor said the line "hitting the brakes too soon, 20 stitches in a hospital room" was inspired by a snowmobile ride with an ex who lost control and wrecked it so badly that she saw her life flash before her eyes. They both had to go to the ER.[2] She also said the following about the line:

That line is in there because it's not only the actual, literal narration of what happened in a particular relationship I was in, it's also a metaphor. "Hit the brakes too soon could mean the literal sense of, we got in an accident and we had to deal with the aftermath. But also, the relationship ended sooner than it should've because there was a lot of fear involved. And that song touches on a huge sense of anxiety that was, kind of, coursing through that particular relationship, because we really felt the heat of every single person in the media thinking they could draw up the narrative of what we were going through and debate and speculate. I don't think it's ever going to be easy for me to find love and block out all those screaming voices.

- Taylor about the line "hitting the brakes too soon, 20 stitches in a hospital room."[3]

The song is said to be about Harry Styles.

The music video was released on December 31, 2015. It was directed by Joseph Kahn and filmed in New Zealand.

Storyline
The video opens with the text "She lost him.". Taylor is standing on the beach, when trees start growing out of the sand and it turns into woods. She walks through it and is followed by wolves. They start running after her, so she flees through the woods. She trips and a wolf tears her dress. She falls onto the ground and is now lying in the snow. She walks through snowy mountains and is again followed by wolves. She tears off her necklace and throws it off a mountain. She stands on the edge of a cliff and lets herself fall into the water. As she's underwater, all the water disappears and is now lying on a barren landscape. She touches a tree and is in a frozen forest. There's an avalanche that covers her. The forest is now wet and muddy as she crawls through it. She reaches out to the sky as a root grows around her. She's now standing in a normal, sunny forest. At last, she's in a burning forest. As the video reaches the end, the forest disappears and she's on a beach. Taylor sees herself still standing on that beach; she puts her hand on her shoulder and the video fades to black as the other Taylor turns around. The text "She lost him, but she found herself and somehow that was everything" appears.

Taylor Swift - Out Of The Woods

Out Of The Woods

Taylor Swift - Out Of The Woods – The Making Of 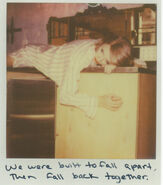 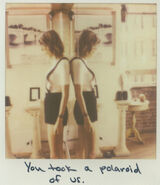 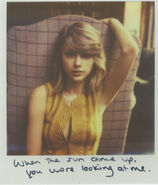 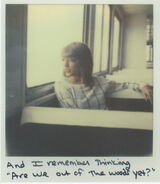 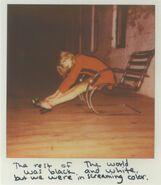 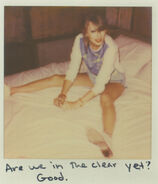 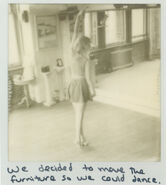